Does Your Dog or Cat have a Puffy Ear Flap?? 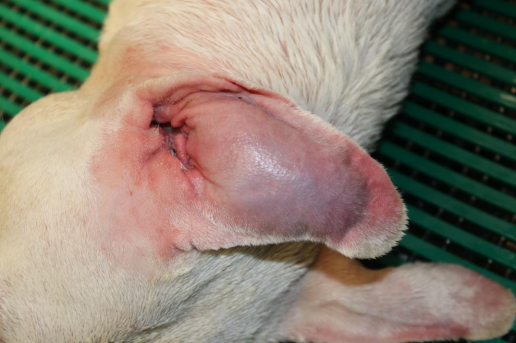 Aural Hematoma in part of the pinna (ear flap)

Aural hematomas are often accompanied by pain or itching in the ear canal. This can be from ear infections from bacteria or yeasts, ear mites, or even painful middle ear infections. So it is very important to be able to identify the source of the pain or itching; it may even be present in the opposite ear. Without relief from this head shaking trigger, the dog or cat will only make things worse.

If left untreated, an aural hematoma will do what is known as organizing. The blood pocket will eventually clot and scar tissue will be laid down to heal the holes in the blood vessels. This will lead to contraction of the scar and disfigurement of the ear flap. (In human boxers, this is known as a cauliflower ear). Often, the misshapen ear flap will actually cover the opening of the ear canal making hearing difficult.

At Animal Hospital of Montgomery and Montgomery Pet Skin and Ear Clinic, we surgically correct aural hematomas using a CO2 Laser. Laser hematoma correction results in almost no disfigurement of the pinna. The skin is opened in numerous places over the hematoma, the blood

and clots are removed, then the skin of the ear flap is sutured to the underlying cartilage to obliterate the space created by the hematoma. During healing, the skin will be tacked down and the circular holes the laser

Postoperative care at home involves removing any accumulated serum weeping from the drainage holes on the surface of the concave part of the ear flap, using a washcloth soaked with warm water applied to the pinna twice daily. Dabbing the pinna is preferred over rubbing the pinnal skin with the washcloth. This is continued until the serum is no longer weeping and the concave pinna remains dry

Healing is complete in about 4 weeks after the surgery. That is when the sutures are removed. Taking them out too soon can result in another hematoma forming in the same spot. 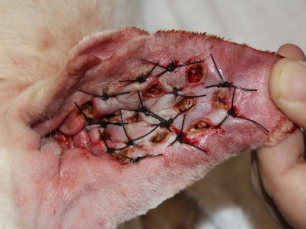 Many sutures are placed to tack the skin down.
This allows drainage to occur until scar tissue seals off the holes. 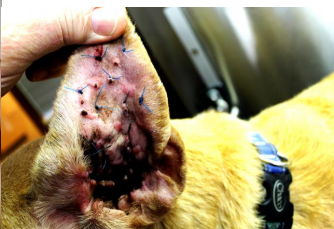