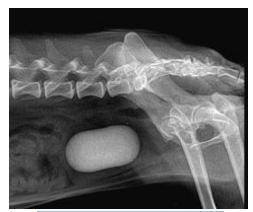 Urinary Tract Stones in Dogs and Cats Bloody urine or straining to urinate often indicates a stone in the urethra, bladder or in the kidneys. In dogs, the most common reason for these struvite stones is a urinary tract infection leading to an increase in the component minerals that make up the stones. In cats, stones most often result from an increased excretion of magnesium in the urine along with stress, which makes cats drink less, thus increasing the concentration of the minerals in the urine. Cats are also prone to making Calcium oxalate stones. Oxalic acid is made in the liver from the breakdown of proteins. When oxalic acid is excreted into the urine, it forms an insoluble crystal when it combines with Calcium.

Urinary Bladder Stones can be large or small and smooth or roughened depending on type. Most stones can be easily detected by a routine X-ray of the abdomen. The two most common stones, struvite and calcium oxalate are called radiodense, so they show up white on the X-ray. Two other, less common stones made of urate and cysteine are radiolucent and cannot always be seen on an X-ray without using a dye in the bladder to outline them.

If there is a blockage, the first thing we do is to sedate the patient and try to unblock the urethra so urine can pass. We collect urine for a urinalysis and often we do a bacterial culture of the urine to see if there is an infection and which antibiotic would be the most effective at treating it. In some cases of small stones with minimal patient discomfort, we can try dietary therapy to dissolve or reduce the size of the stones. Calcium oxalate stones are nearly impossible to dissolve, but for dogs with suspected struvite stones, a special diet called Hills S/D (stone diet) is fed exclusively for a maximum of 45 days. This is not a complete and balanced diet, but it helps reduce the size of many stones. Sometimes, especially in female dogs, reducing the size of the stone will allow her to pass it through the urine. Male dogs are not so lucky. The size of the stone has to be tiny for them to pass it. In cats, a food called Hills C/D Multicare has been shown to HELP dissolve struvite stones in from 7 – 21 days so we can try dietary therapy first. If the patient is really bleeding or is in severe pain, surgical removal of the bladder stones and urethral stones is the only other option. Bladder stones can be removed fairly easily, but if urethral stones are stuck in the male dog's penis, another procedure called a urethrostomy has to be done to open up the urethra close to the body wall before the urethra goes through the penis. If the stones are stuck in a male cat's penis, we often do a perianal urethrostomy and cut off the penis so that the urethral opening is larger.