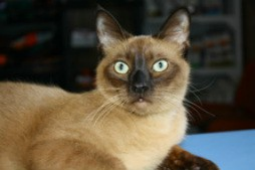 Heartworm infection takes place when a mosquito carrying infective, microscopic-size heartworm larvae, bites into a cat for a blood meal. The larvae then actively migrate into the new host and develop further as they travel through the subcutaneous tissue in the cat's body. At about 3-4 months, they usually settle into the arteries and blood vessels of the lungs, where they continue to develop to sexual mature male and female worms (Dirofilaria immitis). The average time from when the microscopic parasites enter the host until the females develop into mature worms and produce offspring is approximately eight months and is referred to as the prepatent period. This is about one month longer than in dogs.

Some cats appear to be able to rid themselves of the infection spontaneously. It is assumed that such cats may have developed a strong immune response to the heartworms, which causes the death of the parasites. These heartworms may die as a result of an inability to thrive within a given cat's body.

Cats typically have fewer and smaller worms than dogs and the life span of worms is shorter, approximately two to three years, compared to five to seven years in dogs. In experimental infections of heartworm larvae in cats, the percentage of worms developing into the adult stage is low (0% to 25%) compared to dogs (40% to 90%).

However, heartworms do not need to develop into adults to cause significant pulmonary damage in cats, and consequences can still be very serious when cats are infected by mosquitoes carrying heartworm larvae. Newly arriving worms and the subsequent death of most of these same worms can result in acute pulmonary inflammation response and lung injury. This initial phase is often misdiagnosed as asthma or allergic bronchitis but in actuality is part of a syndrome now known as Heartworm Associated Respiratory Disease (HARD).

Which Cats Are Susceptible? Although outdoor cats are at greater risk of being infected, a relatively high percentage of cats considered by their owners to be totally indoor pets also become infected. Overall, the distribution of feline heartworm infection in the United States seems to parallel that of dogs but with lower total numbers. There is no predictable age in cats for becoming infected with heartworms. Cases have been reported in cats from nine months to 17 years of age, the average being four years at diagnosis or death.

Signs associated the first stage of heartworm disease, when the heartworms enter a blood vessel and are carried to the pulmonary arteries, are often misdiagnosed as asthma or allergic bronchitis, when in fact they are actually due to a syndrome newly defined as Heartworm Associated
Respiratory Disease (HARD).

Heartworm infection in cats is harder to diagnose than it is in dogs and it is easy to overlook. Most infected cats do not have microfilariae (immature heartworm larvae) in their blood like dogs. Blood tests to check for heartworm antigens and antibodies are available, but their interpretation does not confirm or refute the presence of heartworms in the cat’s heart and lungs. A Positive antigen test means that there was a heartworm present recently. A Positive heartworm antibody test means that there could have been a heartworm present within the past year.

The diagnostic plan for heartworm disease in cats can include, but is not limited to, a physical examination, radiography (X-ray), and a CBC (complete blood count). Other tests, such as ultrasound and blood testing may be done.

Physical Examination The results of a physical examination may appear to be perfectly normal in cats infected with heartworms. Harsh lung sounds are a frequent abnormal finding and may be present in cats without any respiratory signs. In cats, the primary response to the presence of heartworms occurs in the lungs.

X-rays Typically, the pulmonary arteries are enlarged with ill-defined margins, most prominent in the lower lobes of the lungs. X-ray imaging is generally considered the single most useful test for confirming a diagnosis and for developing a prognosis (outlook for recovery).

Currently, there are no products in the United States approved for the treatment of feline heartworm infection. Most cats with heartworm infection that are not demonstrating clinical signs are allowed the time for a spontaneous cure to occur. If there is evidence of disease in the lungs and their blood vessels consistent with feline heartworm infection, such cases (possibly in the early stage) can be monitored with chest X-rays every six to twelve months as needed. Supportive therapy with small, gradually decreasing doses of prednisolone (a cortisone-like drug) is recommended for cats with radiographic or clinical evidence of lung disease.

There are four heartworm disease preventive products approved by the FDA for use in cats, Heartgard® for Cats (Ivermectin, orally) from Merial, Revolution® (Selemectin, topically) from Pfizer and Advantage Multi™ for Cats (Moxidectin / imidacloprid, topically) from Bayer. All of these products are considered effective in preventing the development of adult heartworms when administered properly on a monthly basis relative to the period of transmission.