What is a Staph infection? Staphylococci bacteria (Staph) normally reside on the skin, mouth and nasal passages of animals and humans without causing any problem. They are considered opportunists, only causing disease when the conditions are right. On normal healthy skin, Staphylococcal bacteria are present in small numbers and do not cause any problems. But once the skin is irritated by something, they can invade the damaged area and rapidly multiply, causing an infection. There is not a primary disease that causes a Staph infection by itself, so looking for a reason for a Staph infection is the doctor’s primary duty.

What causes a Staph infection? In dogs and cats, scratching, licking and chewing are the most common causes of skin irritation. Anything that causes itching and resultant self trauma to the skin can allow Staphylococcus bacteria to become a problem. Common causes of itching include fleas, atopic (environmental) allergy, and food allergy. Certain systemic diseases like hypothyroidism and Cushing’s disease can also lead to a Staph infection. Irritating chemicals that the pet may encounter as well as topically applied flea killing products can also cause itching and a resulting Staph infection.

Several types of Staphylococci occur on pets. Staph. pseudintermedius is the most common, but other types such as Staph. aureus, normally a human pathogen, and Staph. schlefferi can also be cultured from dog and cat infections in much smaller numbers.

What is meant by methicillin resistance? Methicillin is a beta-lactam antimicrobial introduced in the 1950s. It was quite resistant to beta-lactamase, an enzyme produced by many types of resistant bacteria that breaks down antibiotics so they will not kill the bacteria.

All beta-lactam antibiotics, like the penicillins and cephalosporins, have a common element in their molecular structure: a four-atom ring known as a beta-lactam. The beta-lactamase enzyme breaks that ring open, deactivating the antibiotic’s antibacterial properties. Methicillin was originally used to treat penicillin-resistant staphylococci. Bacterial resistance to methicillin emerged soon after its introduction.

Newer research has shown a more important genetic reason for Methicillin resistance. In the bacterial cell wall, there are several layers of protection all connected to each other. On these layers are special antibiotic attaching sites, called penicillin binding proteins (PBP). In resistant Staph bacteria, either they do not have PBPs in great numbers or these PBP sites are chemically altered. In either case, the antibiotic cannot adequately bind to the bacteria and kill it.

Methicillin is no longer made, so a laboratory diagnosis of MRSP is actually done by testing for bacterial resistance against oxacillin, a similar antibiotic that is more stable for testing purposes.

How do bacteria become Methicillin resistant? The emergence of methicillin resistant Staphylococcus pseudintermedius (MRSP) in animals may be due in large part to prior antimicrobial use. A small number of MRSP infections are acquired infections from contaminated surroundings, as would be found in a veterinary hospital.

How common is MRSP? In recent years (MRSP) has emerged as a clinically important pathogen causing infections in dogs and cats. The prevalence of MRSP colonization varies depending on the population studied, with rates of 1.5% to 2% in clinically normal dogs and up to 7% of dogs with inflammatory skin disease. The prevalence of MRSP in healthy cats was found to be 4%.

Most cases of MRSP will resolve (with topical treatment, systemic antimicrobial therapy, or both), regardless of methicillin sensitivity, although some MRSP cases take longer to resolve compared with the Methicillin sensitive Staph pseudintermedius. A Methicillin resistant strain of a bacteria may have sensitivity to other types of antibiotics making treatment more effective. A bacterial sensitivity test will help in the choice of a potentially helpful antibiotic. 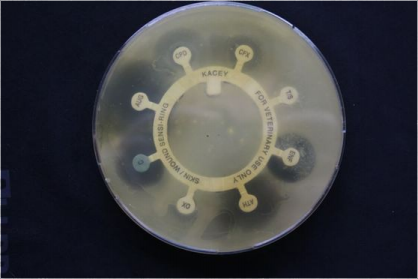 MRSP. This shows that there is good growth of the Staph bacteria on the OX (Oxacillin) antibiotic disk
indicating that the bacteria is totally resistant to that antibiotic.