Parvovirus is one of the most common serious infectious diseases for puppies. It is one of the smallest viruses known. It is spread to puppies through direct oral contact. That can mean that the pup sniffs around and licks in grass where there is parvovirus deposited there from another dog’s fecal matter. If a puppy in the neighborhood has parvovirus and it has diarrhea in the yard, the wind can spread the dried fecal material dispersing the parvovirus. Sometimes older dogs carry parvovirus and when puppies are exposed to these carrier dogs, they get the virus. We recommend keeping puppies away fro0m older dogs until they are fully immunized at 4 months of age. Older dogs rarely get parvovirus disease. Here’s what happens when a susceptible puppy gets infected with parvovirus.

What Does Parvovirus Do? 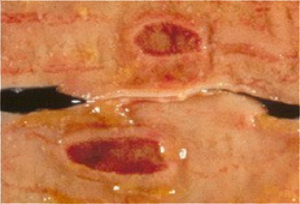 Ulceration of the intestine in parvovirus

Once the virus is acquired by the puppy, there is an incubation period of up to 7 days before the puppy gets sick. During this time, the puppy may appear perfectly normal.

Parvovirus destroys the cells that line the intestine (the microvilli) and it also decreases the ability of the bone marrow to make white blood cells. In neonates, up to 3 weeks of age, it can also affect the heart muscle and puppies just fade away and die.

The signs of parvovirus are bloody diarrhea and vomiting. The puppy may have a fever. Even if the puppy will eat or drink (which most of them won’t) they get very dehydrated from all of the water loss from the damage to their intestines. Dehydration causes the pup to get weak and depressed. Erosions and ulcerations of the intestinal wall allow the bacteria found in the intestine to get into the blood stream from the intestine. Because there are no white blood cells to fight off the infection, these sick pups go into septic shock (blood poisoning) and die.

How Can We Tell if Your Puppy Has Parvovirus?

Puppies that are depressed, vomiting, or those with diarrhea should have a fecal parvovirus antigen test run as well as a white blood cell count done. The parvo test is pretty good at detecting parvovirus in the feces, but if the diarrhea is very watery, it sometimes will not pick up enough virus to show a positive test result. The white blood cell count usually drops in the second or third day of the disease, so it may be normal initially.

Can Parvovirus Be Treated?

Since this is a viral disease, we have no specific antiviral drug to help treat the disease. The puppy needs to fight the viral part of the disease with its own immune system. The veterinarian’s job is to help support the puppy and to prevent dehydration and sepsis.

The goal of treatment is to give the puppy large volumes of intravenous fluids to replace water loss and give them enough water for daily maintainenance. Fluid therapy also maintains normal blood pressure because severely affected puppies cannot maintain their blood pressure due to shock. Concentrated glucose solutions are infused intravenously periodically after the dehydration is corrected to help provide calories, since the puppy is not eating. In addition, intravenous antibiotics are given to help counter the effect of the bacteria in the blood. Drugs to help control vomiting and diarrhea are also administered along with supplements of certain electrolytes, like potassium. In severe vomiting cases, drugs that stop stomach acid help heal the erosions in the stomach and esophagus. This treatment can take two or three days in the veterinary hospital during the most severe course of the disease.

After the virus is neutralized by the puppy's immune system, the intestinal lining grows back fairly rapidly. The diarrhea and vomiting subside with time. Once this happens, the puppy will be able to take small amounts of food and keep it down. The white blood cell count will climb, so the puppy will be able to deal with most bacterial infections. The full course of the disease is anywhere from 3-5 days. Breeds such as the Doberman, Labrador, and the Rottweiller may take longer to recover.

Fortunately, with proper hospital treatment over 90% of puppies survive parvovirus. Without treatment, most puppies will die. 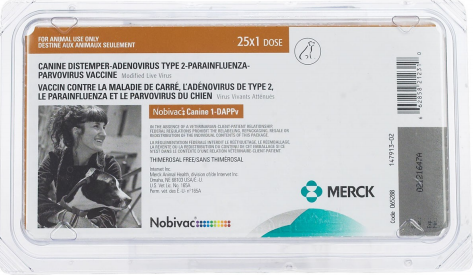 There are Vaccines Against Parvovirus

Parvovirus vaccines are available to help puppies develop their own immunity to parvovirus and prevent the disease. Parvovirus is included in multivalent vaccines against other viral diseases. We have identified at least 3 different strains of Parvovirus and the vaccines confer immunity against all of them. However, vaccinations in puppies need to be started when the puppy is 6 weeks old and they are given every 3-4 weeks until the pup is 4 months old. Giving vaccines to puppies in this manner helps to overcome the effect of the antibodies provided by the mother that interfere with a good vaccine reaction.

Puppies get immunity against many diseases from their mothers in the antibody rich first milk (colostrum). These antibodies remain in the puppy for about 3-4 months, depending on how much colostrum a puppy received in the first few days of life. When maternal or colostral antibodies are present in the puppy’s system, they remove most of the the viruses that are given in the vaccine. The vaccine will “sensitize” the puppy's immune system to the vaccine viruses, even though there is not much immunity conferred with puppy vaccines. So a puppy that only got one or two vaccines early in life may not be immune to parvovirus and may get the disease in spite of having had vaccines. By 4 months of age, there are no maternal antibodies left in the system and the vaccine can induce a high level of immunity against the parvovirus.