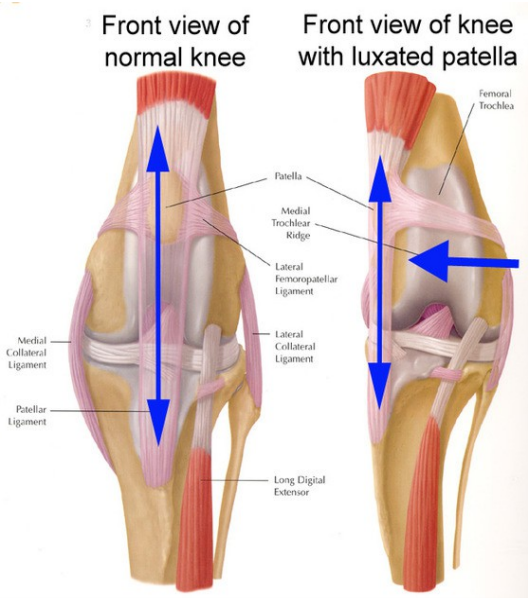 The Role of the Patella in the Normal Knee Joint

The patella, or knee cap, is a small bone buried in the patellar tendon of the large quadriceps muscles on the front of the thigh. The patella normally rides in a deep groove in the lower end of the femur bone within the knee joint. The patellar tendon attaches to the tibial crest, a bony prominence located on the tibia, just below the knee joint. The quadriceps muscle, the patella and its tendon form the “extensor mechanism” and are normally well-aligned with each other. This mechanism is essential for running and jumping. In these movements, the knee is rapidly extended by contraction of the quadriceps causing the kneecap to push on the femur to straighten the leg propelling the body forward.

Patellar luxation is a condition where the knee cap rides outside of the femoral groove. It can be congenital (the dog is born with a very shallow or absent femoral groove) or traumatic (from being hit by a car or twisting the leg). Congenital Patellar Dislocation (CPD) is fairly common in many small dog breeds like poodles, Yorkshire terriers, Pomeranians, Boston terriers, and Chihuahuas. It is a genetically transmitted trait and those dogs that are born with patella dislocation should not be used for breeding.

How Do I Know if My Dog has a Patellar Dislocation?

Clinical signs associated with patellar luxation vary greatly with the severity of the disease. It can be found in one or both knees. CPD is graded on a scale of 1 – 4 with 4 being the most serious. It may be an incidental finding detected on a routine physical examination indicated by the kneecap moving in and out of the groove as the knee is manipulated (Grade 1) or the dog may carry the affected limb up all the time with loss of the use of the leg (Grade 4). Most dogs affected by this disease will suddenly carry the limb up for a few steps, and then they put it down as the kneecap pops back into place. Jumping on the furniture or climbing steps may stop or the dog will be reluctant to jump down.

As the disease progresses in duration and severity, this lameness becomes more frequent and eventually becomes continuous. In young puppies with severe medial patellar discocation, the rear legs are weak and the puppy has trouble standing. In older dogs, the constant abrasion of the patella rubbing off the ridge of the remaining femoral groove may cause arthritis and pain. In addition, if left untreated, CPD can change in severity (Grade 2 to a Grade 3 to a Grade 4) due to the remodeling of bone that occurs within the joint over time. 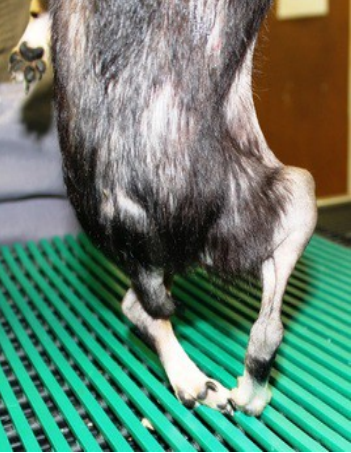 This 8 year old Chihuahua has Grade 4 (inoperable) patella dislocations on both rear legs.
The kneecaps have fused to the bone and the muscles have contracted, folding the legs upward and causing the toes to criss cross.
This dog cannot walk properly.
Surgical correction early in life may have prevented this.

What Options are Available for Treating Patellar Luxation?

Patellar luxations that do not cause any clinical sign should be monitored but do not typically warrant surgical correction, especially in small dogs. Other than pain relievers for the arthritis, there is no specific medical therapy for this condition. Surgery is considered in grades 2 and 3 CPD. Grade 4 CPD is inoperable because the bones have fused and the muscles have withered away leaving only fibrous scar tissue.

One or several of the following strategies may be required to correct patellar luxation:

After this type of surgery, the knee joint needs immobilization for several days. A heavy bandage is applied that prevents flexion of the joint. Enforced cage rest in the hospital for 3 days gives time for scar tissue to begin forming and the inflammation from the surgery to subside. Pain relievers are given to decrease the pain that results from the surgery to the bone. The leg bandage is usually removed prior to discharge from the hospital. The dog will carry the leg off the ground for a period of time, usually 2-3 weeks. If there is too much activity and the dog tries to use the leg too soon, the sutures in the patellar tendon can be pulled loose. Physical therapy can be done with the dog lying on its side. Flexing and extending of the knee joint twice daily for a minute or two during the healing period helps keep the muscles stretched. By 4 -6 weeks, the dog should be walking on the operated leg.